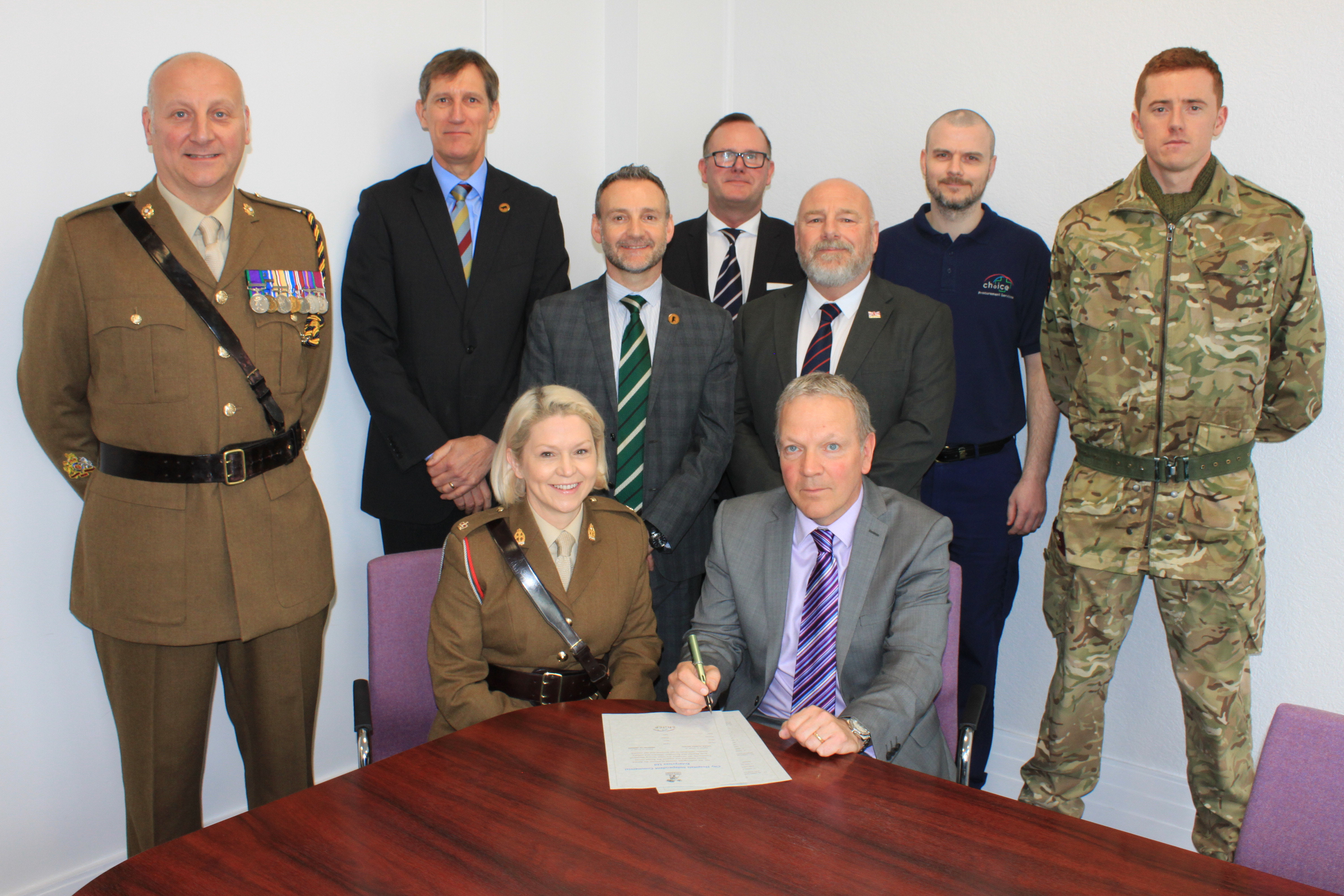 CHoICE is officially an armed forces-friendly

CHoICE Ltd, which provides facilities, pharmacy and other operational support services for South Tyneside and Sunderland NHS Foundation Trust, has signed The Armed Forces Covenant, formally identifying itself as a forces-friendly employer.

The covenant represents a promise by the nation that those who serve or have served, and their families, are treated fairly. It focuses on helping members of the armed forces community to have the same access as any other citizen to everything from healthcare, education and starting a new career, to financial assistance and having a home.

As well as signing The Armed Forces Covenant, CHoICE has also signed up to Step into Health, developed in conjunction with The Royal Foundation and Walking With the Wounded to provide a dedicated pathway for the armed forces community to access the numerous career opportunities available in the NHS.

CHoICE Managing Director Ian Makinson said: “We support and assist the NHS - one of the country’s great institutions - in providing healthcare services, and we felt it was only right that we should demonstrate that we recognise the contribution made by service men and women, past and present, to the country and to our company.

“We know that we can benefit from the wide range of unique training, skills and experiences that reservists and veterans can bring and we already have good links with the armed forces. We employ a number of veterans and we actively support staff who are members or who wish to join the reservists or cadet forces, ensuring they can take leave to train and supporting them during deployment. We also show flexibility to our employees who have partners in the armed forces.”

Nathan Gibson, a clinical engineer with CHoICE, is a member of the Reserves, currently serving as a Lance Corporal with 3 Troop, 299 Parachute Squadron, Royal Engineers.

Nathan said: “CHoICE and, in particular, my manager and colleagues in clinical engineering, have been incredibly supportive of my Army reservist career over the years – from accommodating training nights and annual 10-day training camps, all the way to supporting a six-month deployment to Africa.

“I feel the training I’ve received through the Army has had a positive impact on me and my outlook on work. Deploying to support the United Nations in South Sudan was a unique opportunity and I’m grateful to have been allowed to do so. Knowing my job was still going to be there upon my return made a huge difference and I have CHoICE to thank for that.”

Mark Hope, who served overseas with the Royal Military Police, said: “I feel supported in my career after the armed forces and I look forward to being able to offer advice and experience to service personnel who are considering a career in facilities management.”

Gary McLafferty, the Ministry of Defence’s Director of Engagement at the North of England Reserve Forces’ and Cadets’ Association, said: “We are particularly delighted that CHoICE has not only signed its own Armed Forces Covenant, pledging to support its own armed forces community, but is also supporting the ‘Step into Health’ initiative. A growing number of organisations across the North East are making the pledge, which demonstrates their armed forces-friendly status and commitment to supporting their employees who are reservists or who are ex-military, and their flexibility regarding the unique situations of the wider armed forces community, particularly within the healthcare sector. It is important that, whilst we continue to improve support for service leavers and their families who face particular challenges after leaving, we also recognise and celebrate that most veterans leave enriched by their service and offer a variety of unique skills to an employer.”

Employee of the Month - Januar...